Preparing to put our kayaks in the water. Photo by Lea Anna Cardwell

I’ve never really been the “outdoorsy” type. Growing up as an only child and a girly girl, the biggest adventure I ever had was staying in my grandparents’ camper in a state park. That’s not to say I didn’t enjoy being adventurous, but I was just never exposed to hiking or canoeing or anything that required me to rough it for a while. In general, I’m not the toughest person when it comes to nature and the elements. So when I was given the opportunity to participate in a guided kayak tour this week, I was naturally a little wary.

When Audra Gibson, the creator of this website, first asked me how I felt about kayaking with Coastal Expeditions, I said I would love to try it. That was the honest truth, and I was very intrigued by the thought of paddling through a peaceful Lowcountry creek observing the wild life around me. However, as the date came closer, I began to panic. I had never kayaked before, and I had only been in a boat that required paddling once in my life. The guided tour was going to be five hours long, and the more I thought about it, the more I let the negative thoughts roll through my mind. What if I flip my kayak? What if the paddling is really hard, and I get tired? What if I fall in and there are alligators? Where will I use the bathroom?... In the woods?... Eww, gross… The qualms just kept coming.

I called the Coastal Expeditions office to find out what I would need to bring and how I should prepare myself. Mary, the office manager, assured me that I would be in great hands with guides Wick Bouton and Geoff Caruso. She told me to bring water, lunch and sunscreen, and to dress in layers with materials that could dry quickly if they got wet. She also informed me that Coastal Expeditions hosts groups of middle-schoolers quite regularly, so the guides are used to dealing with beginners.

After my conversation with Mary, I started feeling better. I packed my lunch and dressed in leggings and Under Armor with a rain suit on top. Of course I braided my hair and put on my Polo hat, too. I wasn’t giving up all of my girly girl! I made the drive out to McClellanville, about 45 minutes north of downtown Charleston, where I met Wick and Geoff and their trailer full of brightly colored kayaks. I followed them down a long dirt road through the Francis Marion National Forest with pine trees lining each side.

We finally reached our destination at the edge of the Echaw Creek, a blackwater creek, which is named for the dark color of the slow-moving water, dyed from the tannins in the leaves. Here I met the Funk family of seven who were joining us for the tour. They were a fun bunch visiting Charleston from upstate New York, and they were ready to conquer the day even though some of them were beginner kayakers as well. I was grateful to be surrounded by such an enthusiastic group, and as I looked out at the creek winding through the cypress trees, I knew it was going to be a great day. 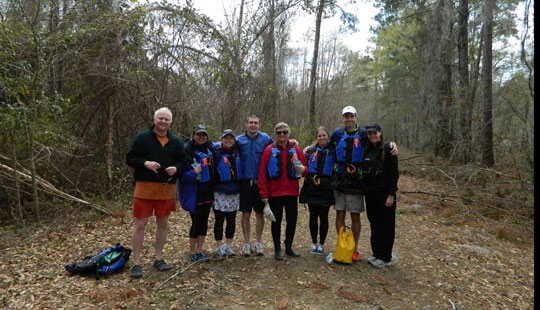 The Funk Family, from left to right: Ed, Katherine, Jessie, Tim, Vicky, Sarah, Isaac, and myself.

We began with a quick tutorial on how to use the gear, how to paddle, and how to work the rudder on the touring style kayak. Then we were off! My first thought was, “Wow, this thing is wobbly.” It was a very different feeling compared to being in a canoe or small rowboat. Wick later explained, “The difference between a kayak and every other boat is that you sit in every other boat, but you wear a kayak.” I found this to be very true, and so did poor Tim, the Funk family member who flipped his boat after a close encounter with a tree. He was a trooper though and got right back in despite his newly saturated demeanor. The Funks and I agreed that he won the award for toughest and most improved at the end of the day!

The rest of the trip was smooth kayaking. We began winding our way through the Echaw Creek toward the South Santee River. The water level was very high and the canopy hung low so that we had to maneuver our way through the branches and Spanish moss. We were lucky enough to see five swallow-tailed kites about half an hour into the paddle. Wick explained that this was a rare occurrence, and Geoff quickly snapped some pictures for evidence. The birds were beautiful as they sailed overhead, their magnificent white underbellies contrasting starkly with the dark black of their wings and tails. We all took a moment to stare up at them diving through the blue sky. 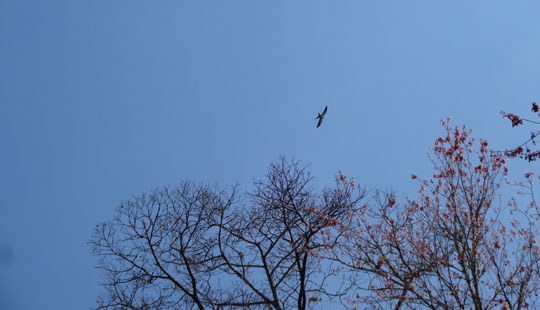 The swallow-tailed kite we spotted. Photo by: Sarah Funk

We continued on our journey watching fish jump right in front of us and seeing turtles perched on their logs plop into the water as soon as they saw us. My stomach was growling as we approached the opening to the South Santee River, with Cedar Island right in front of us. The last task before lunch was to cross the river and land on the island, which was actually a bit more difficult than we planned. As we paddled out into the river, the current picked up enough that we had to angle our kayaks at a 45 degree angle toward the shore so as not to be pushed down stream. My little arms were paddling as fast as they could. With the help of our expert guides, all eight of us safely disembarked with minimal trouble.

As I set foot on shore, it felt amazing to stretch my legs. We picked a spot in the sun and sprawled out on our life jackets for our unique picnic. I can promise you that a turkey sandwich never tasted so good. After two hours of paddling, I literally could’ve eaten anything! My arms were a little sore, but I felt really accomplished, like I had truly earned that lunch. So much so that I even indulged in the Funks’ stash of Chips Ahoy! After lunch we began looking for a good place to re-enter the water, and as we walked up and down the shoreline we noticed some very large tracks and droppings. After much debate, we agreed it looked like the trail of a hog. Needless to say, I was not opposed to getting back in the kayak, and soon we were on our way. 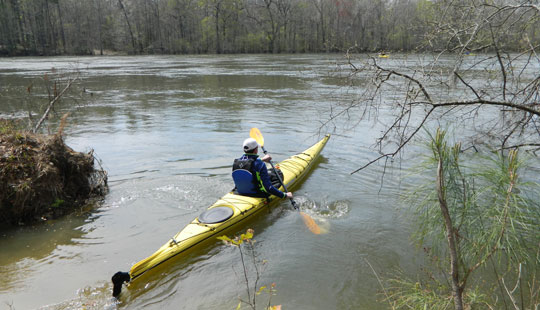 Isaac leading the way for the second half of the paddle.

The trip back seemed to go by much faster, or maybe it was just because I considered myself an expert kayaker at that point. The swallow-tailed kites were still hanging out in the top of the old cypress tree, and we also spotted a great blue heron cruising around the bends of the creek. The sun was beaming down and as I looked up through the oaks and Spanish moss, I realized what I had been missing out on all this time. Charleston is so rich in natural beauty, wildlife, and its plentiful waterways from the harbor and tidal creeks to rivers and blackwater creeks like the Echaw. Even though I had to step outside my comfort zone for this kayak trip, it really opened up my adventurous side. Why not go out and be active and soak up the beauty of this wonderful place? Sure, my arms are pretty sore today, and I had to eat my turkey sandwich with dirty hands, but nothing can replace the sight of five swallow-tailed kites flying over a tranquil Lowcountry creek or the experience of picnicking on a remote river island. I may be a girly girl, but who says you can’t wear pearl earrings with a pair of Chacos? 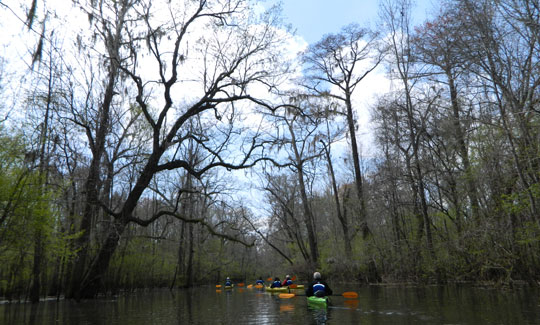 I would like to give a special thanks to Wick and Geoff for the wonderful experience and their awesome tour. I would really like to encourage everyone out there to step outside of your comfort zone and find a little adventure whether it be here in Charleston or in your own hometown. You only live once, so get out and see the sights. You never know what might capture your heart.

“The purpose of life is to live it, to taste experience to the utmost, to reach out eagerly and without fear for newer and richer experience.”  ― Eleanor Roosevelt 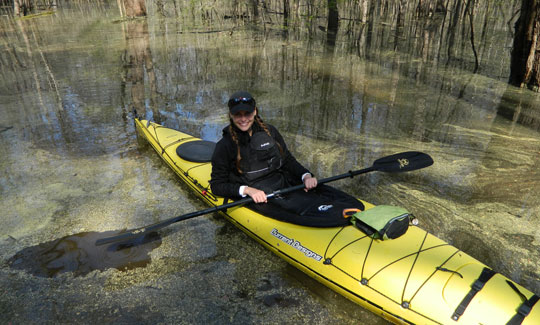 Not only did I survive the paddle, but my braids stayed intact!

Lea Anna is a Louisiana native with an undeniable accent. Raised in a small town, she learned the rules of football and the words to "Amazing Grace" before she could spell her own name. Speaking of the name, she hates being called Leah or Leanne. It’s Lea, like sweet tea, add the Anna. These days, you can find her under the "big city" lights in Charleston, SC, chasing dreams she never knew she had. Like becoming a writer, getting a Master’s degree, and exploring life on the east coast. She hopes you leave this blog with a little insight, and a big smile. So, in the words of a Louisianan, “laissez les bons temps rouler.” Let the good times roll.

More in this category: « Crushin' on REI and Half-Moon New Adventures at the East Coast Paddlesports & Outdoor Festival »